The Dilemma: Most legalized states, outside of  some cities in California, neglected to declare consumption space outside of ” the privacy of your own home.”

The Answer: Declare Consumption Use Spaces.

The introduction of Social Use Spaces will eliminate some social impact disparities, for example, Families are in jeopardy of losing their homes if they are in public housing. Parents smoking with children in the home could lose their children form child endangerment.  The introduction to Social Use Lounges will normalizes marijuana use and indirectly minimizes fines on minorities.

There already is a disparity of minorities in ownership in the Cannabis Industry. Due to the lack of funding and interest. The initial investment sometimes starts at 500k and modestly going upwards to 2 million before ever seeing revenue. That is a huge undertaking for any business person not just a minority. The media paints the picture that the only people interested in the Cannabis Industry are minorities with previous marijuana records. The reality is, that risk doesn’t make it attractive to minorities that have suffered from the war on drugs.

Consumption use lounges could offer a new idea of small business to the industry. With the initial licensing fees remaining manageable we could see an influx of new proprietors in the Industry.

I write this on the day prior to the City Of Las Vegas releasing their Consumption Use venue Bill Draft. I hope they don’t limit licensing to previous licensee holders.

I congratulate the City of Las Vegas and it’s proposed Marijuana Social Use Ordinance. Las Vegas would be the second city to adopt a social use ordinance and the first to include a low-level (11%) liquor sells option. It’s refreshing to know that the ordinance may be available to anyone that qualifies and the licensing fees seem to be manageable. If they move forward with this ordinance as it is, this will be a win for the small business person that is still looking to be in the Nevada Cannabis industry.

Currently Nevada has no open consumption laws. The regulations are written that you must consume in the privacy of your own home. If the city moves forward with this ordinance it will be the resolve to our Cannabis legalization hospitality issue.

I do want to point out that the inability to sell food or hard liquor in the same space may prove to be an economical disadvantage in this space. Although you can sell non cannabis products, I just don’t know if selling t-shirt, cups, hats and other dosing apparatuses will make up the income? I suggested that they look at offering an apparatus rental program that focuses on sanitation similar to the Hooka Lounges. However, If I were looking to get a license I would definitely apply for the low-level license 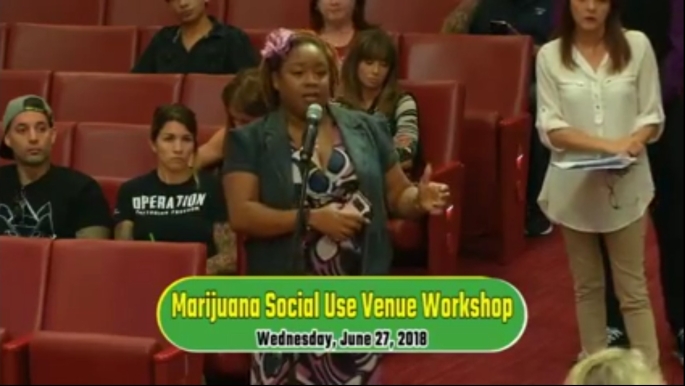 It is my pleasure to serve this community

The license will be 5k a year and the zoning ordinances are the same as other state MME’s. The biggest win for the community is that the new proposed ordinance won’t specify whether the marijuana had to come from a dispensary or not. The city is opting to leave that up to the licensee’s with an expectation of the licensee spelling out there security plan in their application.

Link to watch the live stream